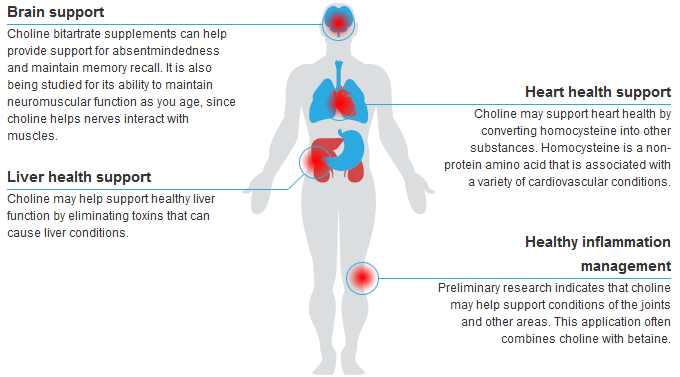 Choline is structurally similar to other B vitamins, however it not recognised as such.

Choline while beneficial for many people, may be particularly useful marathon runners, tri-athletes and any other sports people involved in prolonged physical activity for more than a few hours. In prolonged athletic events, the body relies on choline to provide suitable levels of acetylcholine. It is suggested that when acetylcholine levels fall beyond a point that the bodies nerves will fail to stimulate the muscles, resulting in severe fatigue which inhibits such athletes.

Serves many functions in your body

Choline plays an important part in many processes in your body, including:

SUMMARYCholine is involved in many different processes, such as cell structure and messaging, fat transport and metabolism, DNA synthesis and nervous system maintenance

How much do you need?

Due to a lack of available evidence, a Reference Daily Intake (RDI) for choline has not been determined.

However, the Institute of Medicine has set a value for adequate intake (AI) (6).

This value is intended to be sufficient for most healthy people, helping them avoid negative consequences of deficiency, such as Liver damage

Nevertheless, requirements differ according to genetic makeup and gender

In addition, determining choline intake is difficult because its presence in various foods is relatively unknown.

It is important to note that choline needs may depend on the individual. Many people do fine with less choline, while others need more

Therefore, it’s not surprising that choline intake is associated with improvements in brain function.

Supplementing with 1,000 mg per day led to improved short- and long-term verbal memory in adults aged 50–85 who had poor memory.

In a 6-month study, giving phosphatidylcholine to people with early Alzheimer’s disease modestly improved memory in one small subgroup .

However, other studies on healthy people and those with dementia found no effects on memory

However, there are only a few studies on this in humans.

One observational study of 1,210 pregnant women found that choline intake had no links to mental performance in their children at 3 years of age.

Nevertheless, the same study determined that a higher intake during the second trimester was associated with better visual memory scores in the same children at age 7

In another study, 99 pregnant women took 750 mg of choline per day from 18 weeks of pregnancy to three months after pregnancy. They experienced no benefits for brain function or memory

Some evidence suggests choline may play a role in the development and treatment of certain mental health disorders.

These levels are also used as an indicator for certain mood disorders, and choline supplements are sometimes used to treat bipolar disorder

However, there are currently not many studies available on this.

SUMMARYCholine may boost memory function, improve brain development and treat anxiety and other mental disorders. However, the evidence is mixed.

Choline is associated with the development and treatment of certain diseases.

However, for most of these, the relationship is not clear and research is ongoing (50Trusted Source).

Although choline deficiency results in liver disease, it’s unclear whether intakes below the recommended levels increase your risk of liver disease.

A study in more than 56,000 people found that normal-weight women with the highest intakes had a 28% lower risk of liver disease, compared to those with the lowest intakes

SUMMARYLimited evidence suggests that choline may reduce the risk of neural tube defects in infants, as well as liver disease. That said, choline’s impact on cancer is unknown. More studies are needed.

Too much can be harmful

Consuming too much choline has been associated with unpleasant and potentially harmful side effects.

The daily upper limit for adults is 3,500 mg per day. This is the highest level of intake that is unlikely to cause harm.

It is very unlikely that someone could ingest this amount from food alone. It would be almost impossible to reach this level without taking supplements in large doses.

SUMMARYConsuming too much choline has been linked to unpleasant and potentially harmful side effects. However, it’s unlikely that you can ingest such levels from food alone.

Choline is an essential nutrient that is required for optimal health.

It may play a key role in healthy brain function, heart health, liver function and pregnancy.

Although actual deficiency is rare, many people in Western countries are not meeting the recommended intake.

To up your intake, consider eating more choline-rich foods, such as salmon, eggs, broccoli and cauliflower.

Our Choline Bitartrate is pharmaceutical grade with a purity of over 99%.

A standard dose of choline is 10mg.

Doses over 5g are not recommended as sensitive people can suffer side effects such as low blood pressure and diarrhoea.